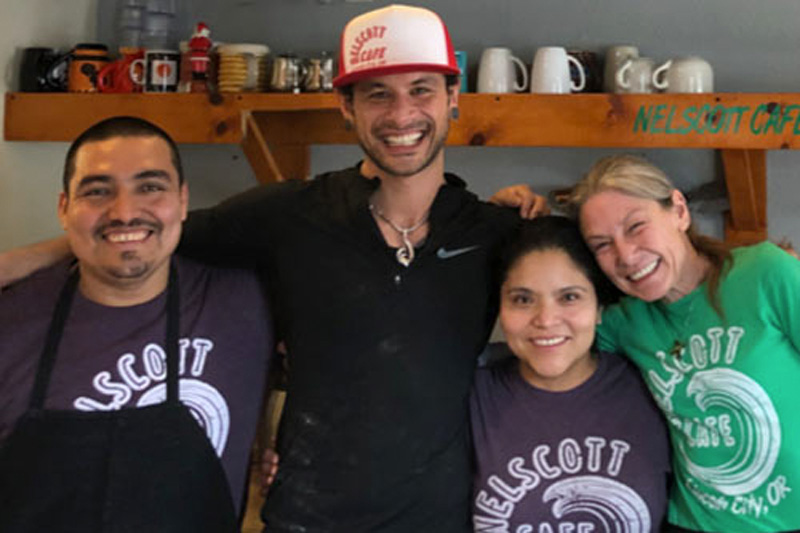 Without question, the best breakfast in Lincoln City for our family is the Nelscott Café! To know a little more about the place, it’s important to know the owner, Sonnie Kamekona. His heritage infuses every dish on the menu. He’s an ageless surfer and diving instructor born in Hawai’i. His smile and laid-back attitude seem arrested in his mid-twenties. He pronounces Hawai’i with the apostrophe.

“I moved here from Maui,” says Sonnie. “I was a diving instructor, taking all the tourists out diving. I surf a lot.”

While the Nelscott Café first opened its doors in 2009, under the management of a husband and wife, it was Brenda Furniss – Sonnie’s Mom – who bought it in 2014, who really created a landmark culinary experience on the Oregon Coast. Furniss had retired from the medical field and fell in love with it, and decided it would be her retirement job. Unfortunately, she only operated it for two years until she passed away in 2016. At that point, her son Sonnie took over.

“When I arrived, a lot of the food wasn’t home-made from scratch. A lot of it was different. Part of our culture was to go above and beyond and do the very most, which is Aloha,” says Sonnie. “That’s what Aloha is. To do the best without worrying about what you’re to get out of it. I go shopping every single day. Anything you have eaten here in the last four years, I have bought it, cooked it, cleaned the dish.”

The Best Breakfast in Lincoln City (Or Best Brunch)

Together, Sonnie and Brenda made the menu which includes their signature dish: the Wipeout, a massive plate of biscuits, gravy, fried breaded chicken breast, bacon, green onion and tomato smothered in cheddar cheese. The name is no joke: expect to spend the afternoon resting if you tackle it single-handed—in spite of their Ambiance coffee, which they make so thick and rich you could float a nail in it.

“That was my mom’s idea. (The Wipeout). It derived from the Loco moco, which is brown rice, beef patty, gravy, and green onion on top. But my specialty was homemade biscuits and sausage gravy, so it’s our twist on a loco-moco. Because anybody can make white rice.”

All dough, biscuits, pancakes and cinnamon rolls. Sonnie started making the cinnamon rolls the last year he worked with his mom, Brenda. They are now a fixture of meals, alongside Beignets, Biscuits, poppers, and pancakes.

The menu is Americana with a Hawaiian twist.

Nelscott prides itself on using few ingredients. “We serve clean food: we don’t salt or pepper anything. We want to serve the people healthy food.” While any dish can be made vegetarian, they don’t have any explicitly vegan dishes on the menu. However, if you ask for the vegan scramble or the vegan special, Auntie, Sonnie and the staff will treat you to a massive scramble of potatoes and fresh vegetables—as generous and well-priced as any dish on the formal menu!

Service dogs are welcome inside with their credentials, but the menu itself also offers a canine special! They also offer three picnic tables outside for families with dogs.”

The ambience is American surf casual, and you can find their Soundtrack on Spotify (Nelscott Acoustic). Sonnie takes as much pride in the playlist as in the food. “I hand picked every song!”

Sherri “Auntie” Zamira began working here in 2018, helping with all tasks front-of-house. “This restaurant is an extension of our home,” she says. The décor looks like you’ve just touched down in Hawai’i and crashed at your cool college buddy’s Hawai’ian surf pad. Boards of all description do for art, beneath a clearly used kite-surfing canvas (from local kite-surfer John Monroe, who owns Headstand Photography), art-house lighting, and elevated speakers playing their own mix of down-tempo, reggae, and surf-rock.

The perfect marriage of Oregon food, with Hawai’ian cool.

While they’re only open 7:30 to 3:00 in the afternoon, so if you’re craving their Monte Cristo (3 slices of thick French Toast, Ham, Swiss, grilled chicken breast, and cheddar sprinkled with powdered sugar) or their breakfast burrito (an overfilled 14” tortilla stuffed with ham/bacon/sausage, sausage gravy, cheddar, scrambled eggs, fried red potatoes, onions, peppers, tomatoes and mushrooms) in the afternoon, you’d be advised to consider it a very early dinner.It will probably carry you through to bedtime. Most meals on the menu will do for two.

It’s also the kind of food you’ll crave after a morning spent getting thrashed by the waves…but probably not before.

We recommend Nelscott Cafe to all of our guests at Sweet Haven Rentals!